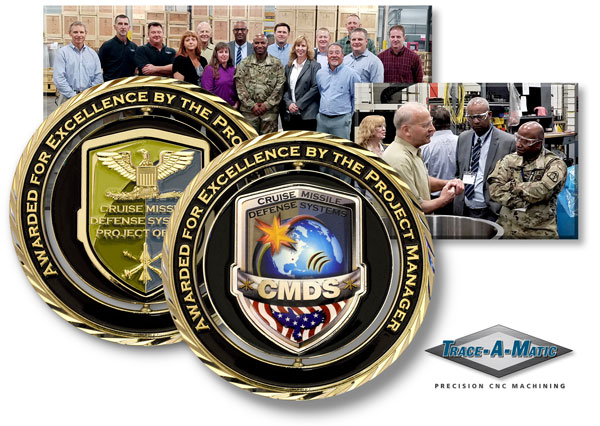 Trace-A-Matic was awarded a Challenge Coin medallion from the U.S. Army for “Project Excellence” by Colonel Chuck Worshim on a recent visit. The Colonel is the program manager for Cruise Missile Defense Systems at the U.S. Army’s Program Executive Office of Missiles and Space (PEO MS). He, his staff, and some strategic customers were given a full tour of Trace-A-Matic North’s state-of-the-art manufacturing facilities, on June 19 in Brookfield, WI.

“It is an absolute honor to have received the prestigious Challenge Coin from Colonel Worshim and the U.S. Army,” said Michael Daws, Vice President of Sales at Trace-A-Matic. ”We work tirelessly to provide precision CNC machined and manufactured components trusted by U.S. Armed Forces to help protect our great nation and her allies. The Colonel’s visit is a testament to the reputation we have established within the military and defense industry, and a true inspiration to our team.”

About Trace-A-Matic Corporation
For over 50 years, Trace-A-Matic (Brookfield, WI & Houston, TX) has been a privately-owned contract manufacturer of complex precision CNC machined components. Our programmatic business focus and relentless drive for on-time quality components in markets like aerospace, defense, oil & gas, power generation, transportation, medical and heavy equipment have made us the choice of global industry-leading OEM brands.

Contact Trace-A-Matic today about our CNC machining services or to request a quote for your next project!